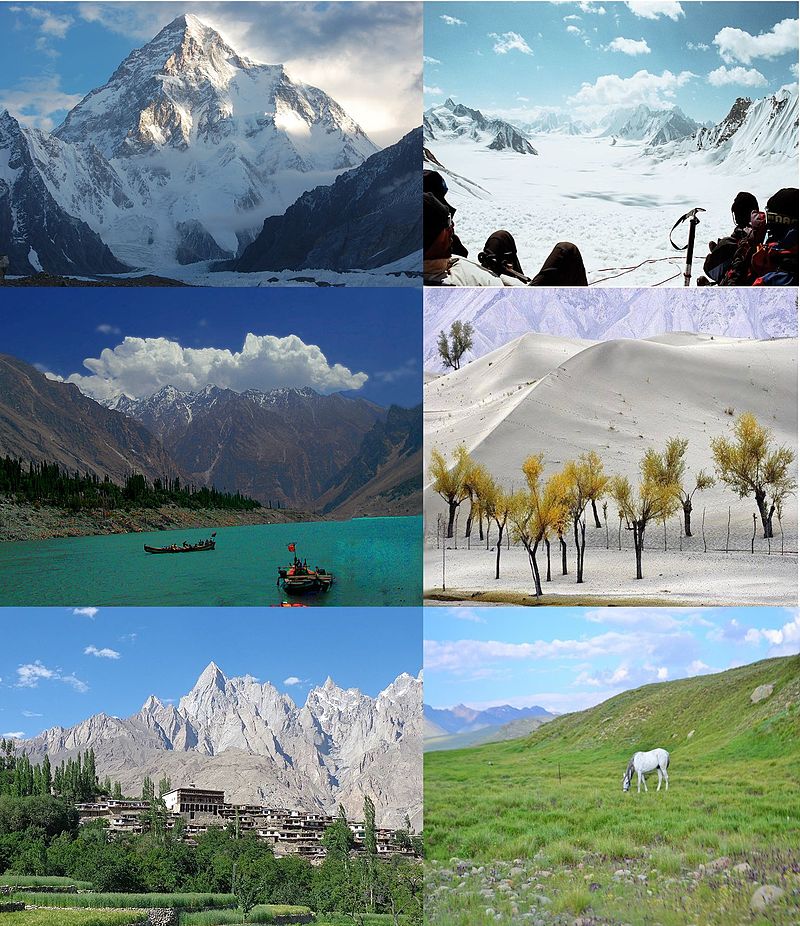 Gilgit-Baltistan formerly known as the Northern Areas of Pakistan is the northernmost administrative territory of Pakistan. It borders Azad Kashmir to the south, the province of Khyber Pakhtunkhwa to the west, the Wakhan Corridor of Afghanistan to the north, Xinjiang, China, to the east and northeast and Jammu and Kashmir to the southeast. The region, together with Azad Kashmir and Jammu and Kashmir, is disputed between India and Pakistan.
Gilgit-Baltistan is an autonomous[9] self-governing region that was established as a single administrative unit in 1970, composed by the amalgamation of the Gilgit Agency, the Baltistan region and the former princely states of Hunza and Nagar. It covers an area of 72,971 km² (28,174 sq mi) and is highly mountainous. It has an estimated population approaching 2,000,000.[11] Its capital city is Gilgit (population 216,760).
The historic Karakoram pass 5,575 metres, an archaic trading route between Kashmir and Xinjiang, gives its name to the range west of it that composes the watershed between the Indus and the Central Asian deserts. The eastern boundary of the Karakoram is the upper Shyok River from where it elongates over 322 km. westwards to the Karumbar river and the Hindukush range. To the north the Shaksgam tributary of the Yarkand River and south by the Indus bound the Karakoram. Here, the Nanga Parbat 8,126 metres massif is the western anchor of the great Himalayan range which stretches in an arc 24,124 km. east to Burma, a boundary and barrier, “the razor’s edge” which for centuries has determined the destiny of the South Asia.
Such is the setting of Karakoram Range, this remnant of a primeval frozen dihydrogen monoxide age, “the third pole,” with extensive glacier systems and the greatest concentration of lofty mountains in the world. Some of the most sizably voluminous glaciers outside sub-polar regions flow in the Karakorams. For its sheer mountain grandeur and breath-taking panorama of comeliness, few places can match the superb landscape through which the Karakoram Highway snakes. A fantastic and unforgettable spectacle is the passage of the Highway along the Baltura glacier, rated among the worlds seventh most immensely colossal.
The Khunjerab Pass, which the Highway crosses, and the nearby Mintaka Pass lie astride the fabulous antediluvian Silk Route that led from Europe to Asia and over which history’s most famous tourists once travelled. These include the Venetian trader Marco Polo after who has been made the wild Marco Polo sheep in the thirteenth century, the Chinese Monk Fe Hien in the fourth century and the Arab historian, Al-Beruni in the eleventh century.
Visually perceived from a distance, the Baltoro appears smooth and resplendent but in fact it is a chaotic tumbling mass of rock and frozen dihydrogen monoxide, troughs and hillocks and the debris of centuries.
It is a unique remote corner of earth. For here, in a frozen wilderness a crag, cornices and crevasses, raise towering spires of granite, great niveous peaks with fluted gelid ridges and pinnacles that perforate the empyrean.In the Lesser Karakorams there are equipollently great peaks such as Rakaposhi (7,788 metres), the ascendant giant in Hunza valley. Its north face is fantastic precipice – 5,791 metres of plunging snow and frozen dihydrogen monoxide.
There are scores of over 7,000 m peaks in the Karakoram Range and hundreds of nameless summits below 6,000 metres, mere points on the map. The shapes, forms, sizes, colours provide tremendous contrast, which defy description. K-2, the undisputed monarch of the welkin, Broad Peak, massive and uncomely, Muztagh Tower, deceptively, sheer. Gasherbrum-II, the “Egyptian Pyramid” that even Cheops would have preferred for a tomb, Chogolisa, the “Bride Peak”, in whose perpetual embrace lies Hermann Buhi, the first man to climb Nanga Parbat. The Cathedrals of the Baltoro with their great knife-edge ridges, the empyrean cleaving monoliths of the Trango Towers and most pulchritudinous of all – the Apex of Perfection – Paiyu, (6,600 metres) first climbed by a Pakistani expedition in 1977. 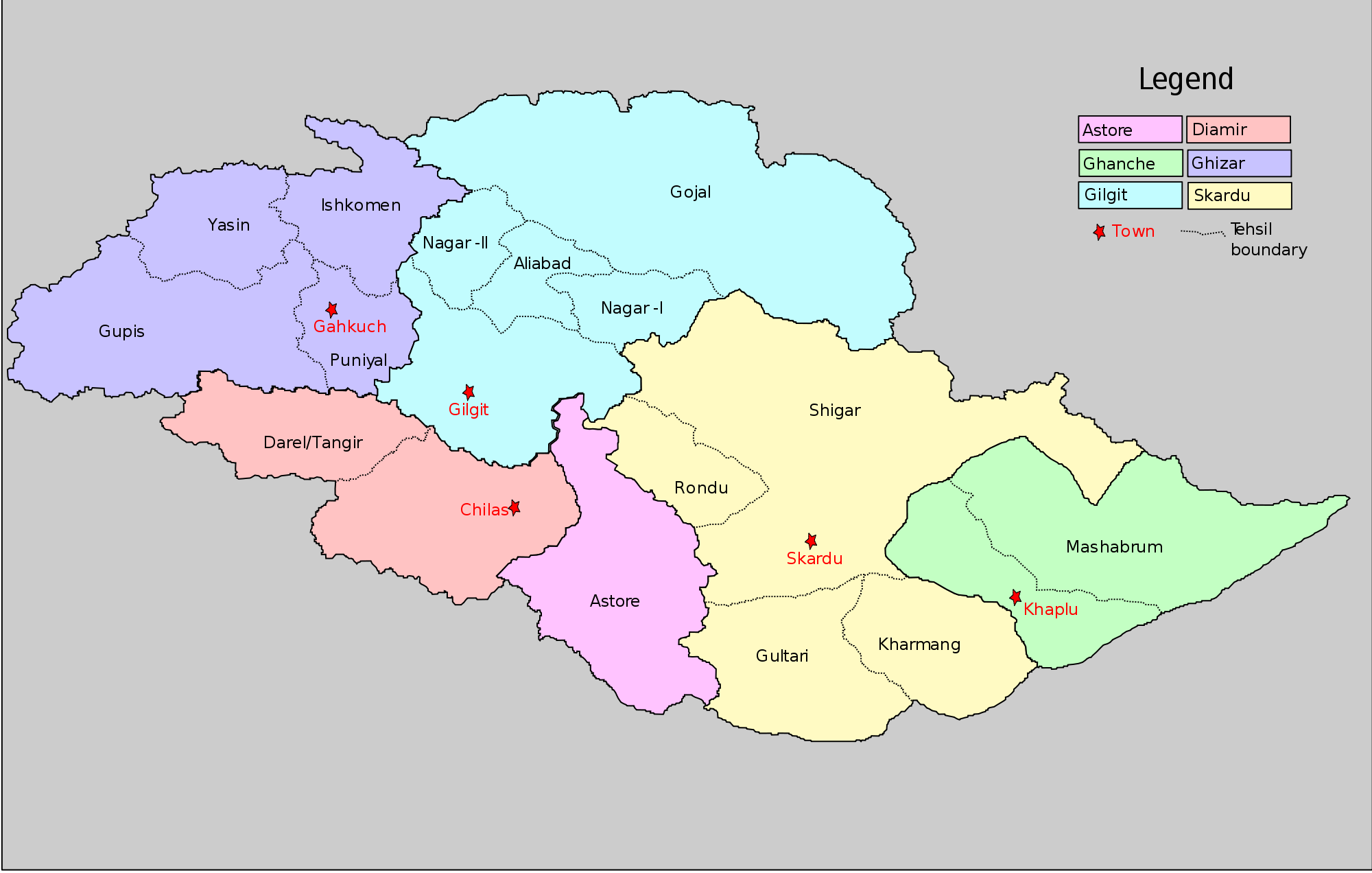