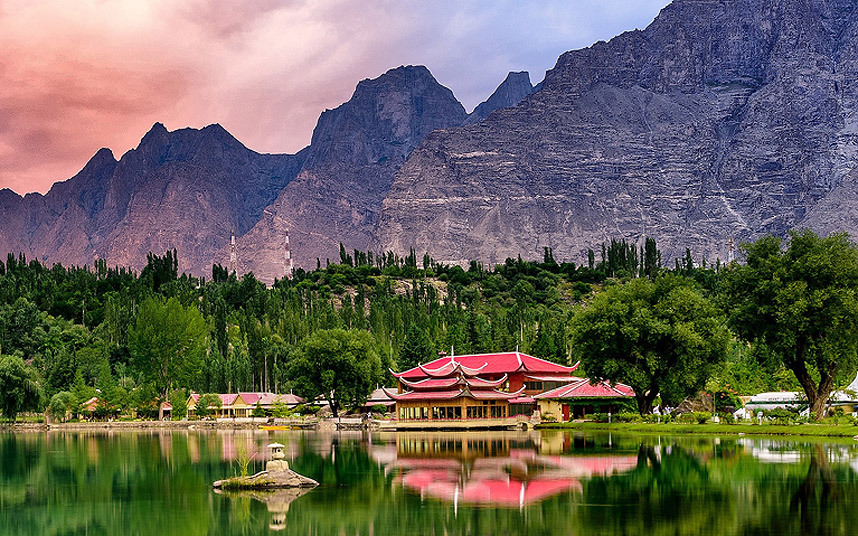 26 beautiful photos you won’t believe were taken in Pakistan.Long considered a no-go for Western tourists, perceived by too many as a lawless desert land, Pakistan is – would you believe it – rather beautiful. From its wild coast in the south, to the meeting point of three colossal mountain ranges in the north, via lush valleys and fertile fields, its landscapes might make you consider it again.

While the Foreign Office still advises against travel to much of the country, notably the Federally Administered Tribal Areas, the Swat Valley and the city of Peshawar, it relaxed its stance towards the northern Gilgit-Baltistan region this year, opening up some of the world’s most extraordinary mountain landscapes to Britons. These photos – this one of the Shangrila Resort north-west of Skardu, taken by Mazar Nazir – might just make you change your mind about Pakistan 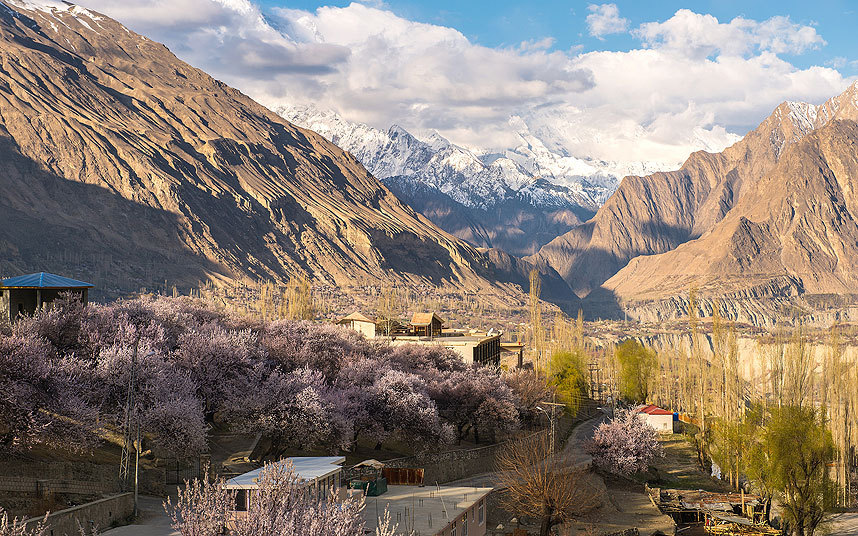 In spring time, the Hunza Valley, in Gilgit–Baltistan, blushes pink, as cherry and apricot trees unfurl their branches from the winter’s cold. The scene may resemble an English meadow, but it is belied by the snowy slopes of the surrounding mountains, all of which reach more than 6,000 metres. 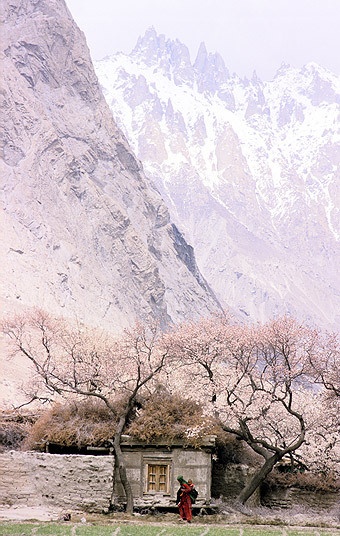 Other crops include honey-dew melons, apples, mulberries and peaches. In autumn, roofs are lined with trays where apricots are left to dry in the mellow sun. While the scenery is beautiful, those who travel here should be ready for rough roads, facilities are basic and unexpected travel changes – landslides, floods and plane cancellations all can, and do, happen. 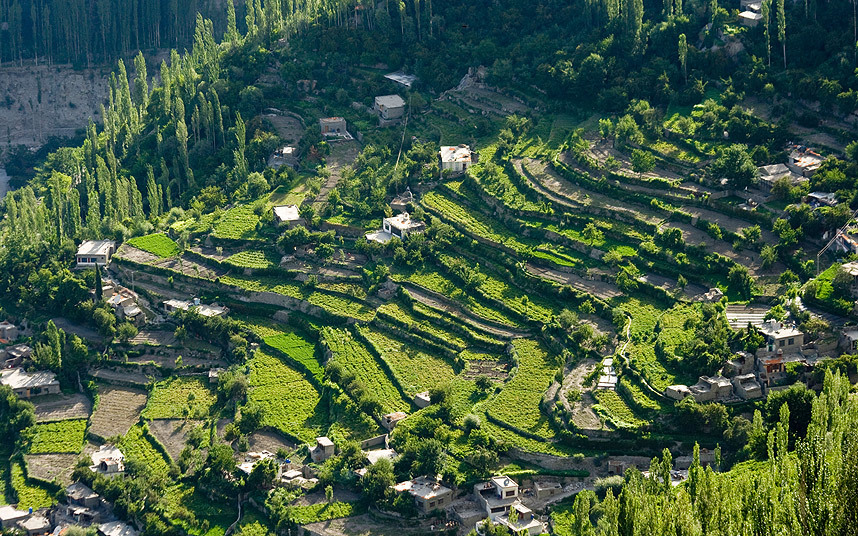 That’s not to put you off though, when there are places like this to be seen. In the village of Karimabad in Hunza, terrace farming allows for the most efficient use of the craggy, steeply-sloping land. Also known as Baltit, the settlement is home to people of the Ismaili faith, a branch of Shia Islam. 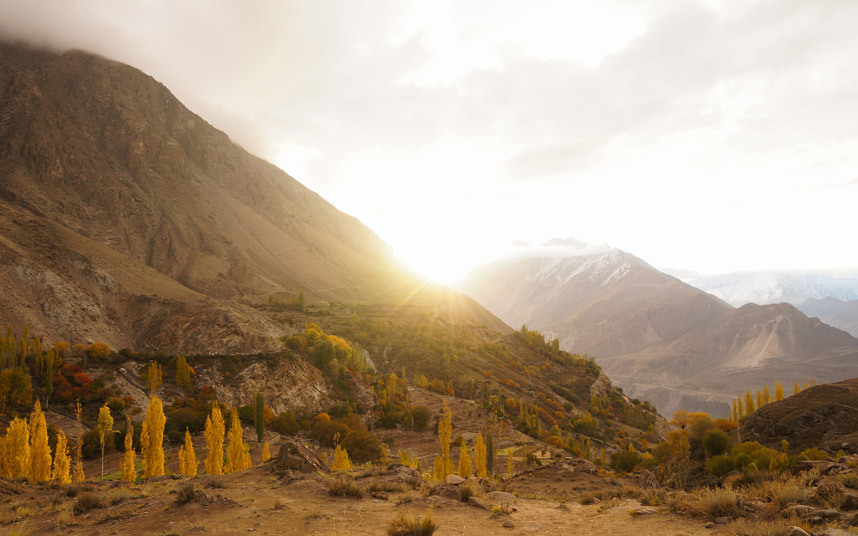 Jonny Bealby, founder and managing director of adventure travel company Wild Frontiers, has been running trips to Pakistan for nearly 15 years. Although he recognises that there are still threats and sectarian violence in parts of the country, he saw significant improvements in security: “The last time I drove from Islamabad to Chitral – on a route that takes you up along the frontier, close to the tribal areas

– we needed to take a police escort. Now, with the army drafted in to control this road with a series of impressive roadblocks, all border crossing points carefully monitored and an elite anti-terrorist squad roaming at will up and down the highway, a police escort is no longer necessary.” This image shows the Hunza valley at dawn. 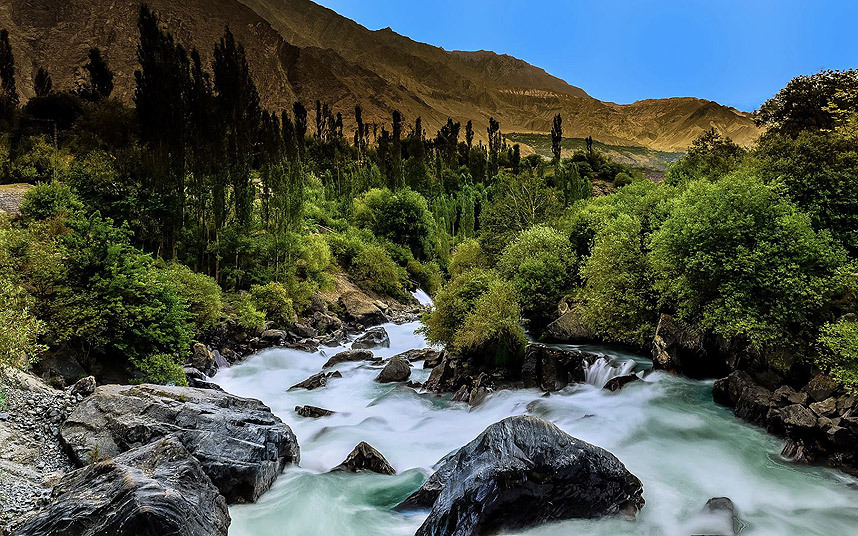 The region is also home to the Astore Valley, a lush part of the country’s north with around 100 villages. Most people here speak Shina. Urdu, Paskistan’s first language, is the second-most spoken. This photo was taken by Mazhar Nazir, who lived in Netherlands and Belgium for many years but now lives in Lahore, Pakistan. He says that he loves to visit the northern areas of Pakistan “because of its natural beauty” and tries to go three to four times a year. You can see more of his images on his Instagram feed. 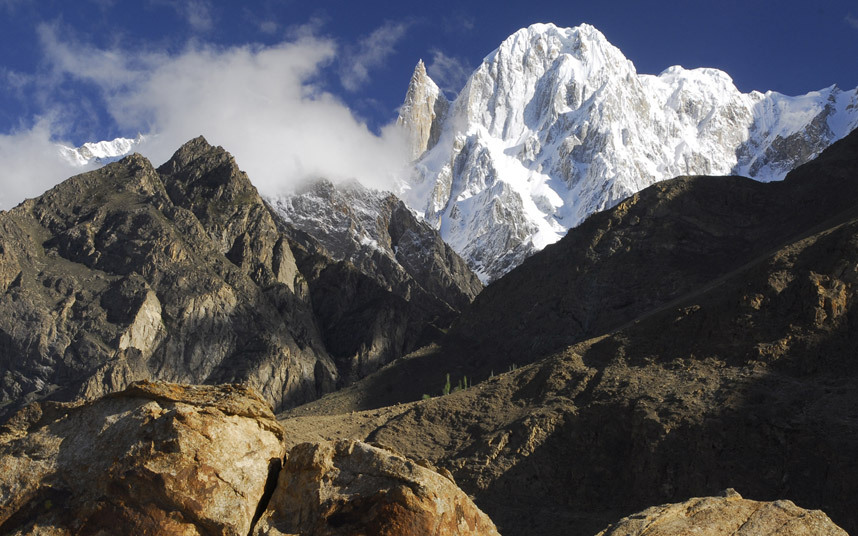 Those who travel with Wild Frontiers (020 7736 3968; wildfrontierstravel.com) to this remote part of the world have the opportunity to admire Hunza Peak and Lady’s Finger, the latter known for being relatively snow-free amongst a crowd of shrouded peaks. Jonny Bealby adds: “After my month there in May I really think Pakistan has turned a corner and could be set to re-emerge as a great adventure travel destination.” 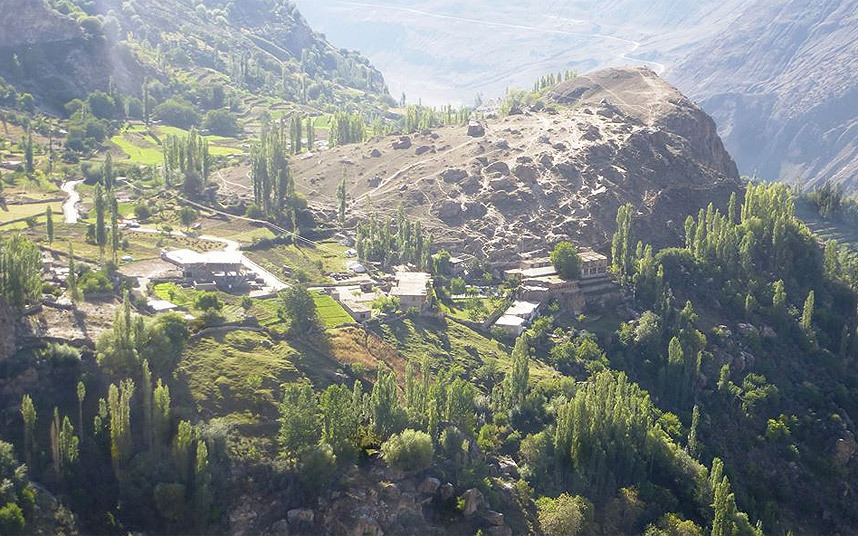 One of the most renowned places to stay in the Hunza valley is the Eagle’s Nest Hotel (eaglesnesthotel.com; pictured) which Wild Frontiers uses on some of its Pakistan tours. Its terrace offers views over the Hunza Valley. 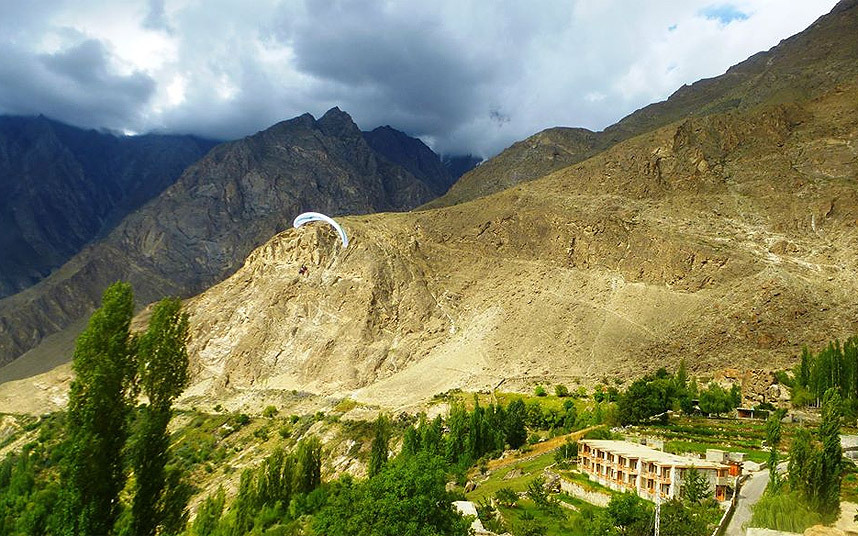 And you might spot the odd paraglider from the terrace too.
Picture: Eagle’s Nest Hotel 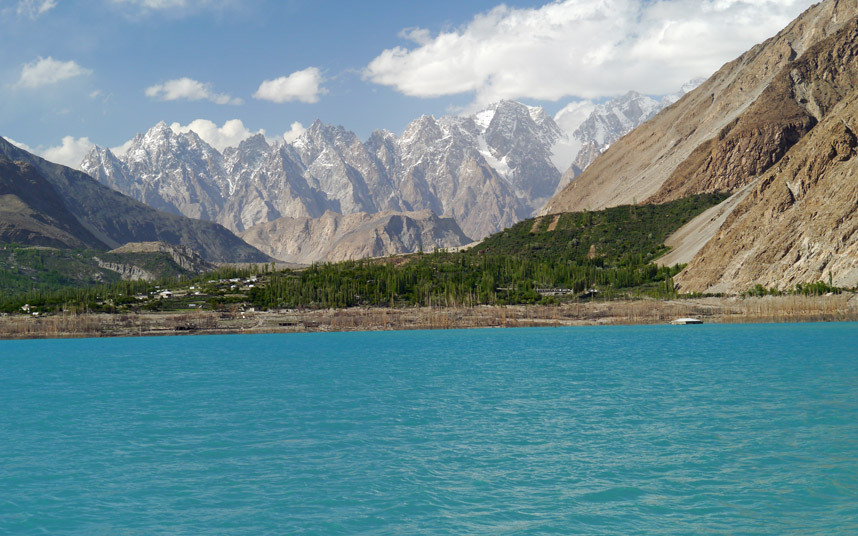 Attabad Lake was formed in January 2010 after a massive rockslide blocked the Hunza valley and submerged five villages. Jeeps are often transported across it on planks laid across the back of a boat. 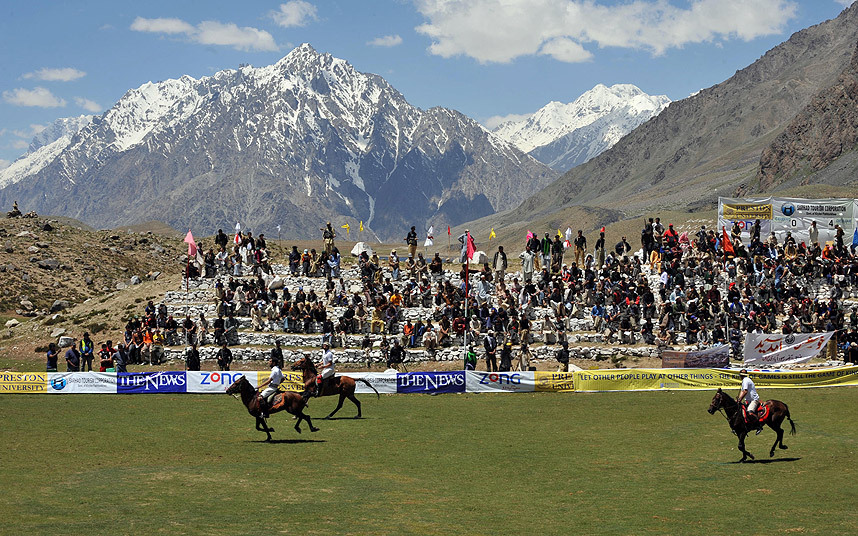 The world’s highest polo matches take place at Shandur Top, the highest polo ground in the world at 3,700 metres, in northern Pakistan. Every July since 1936, teams from Chitral and Ghizer have competed in the Shandur Polo Festival, where onlookers enjoy folk music and dancing. 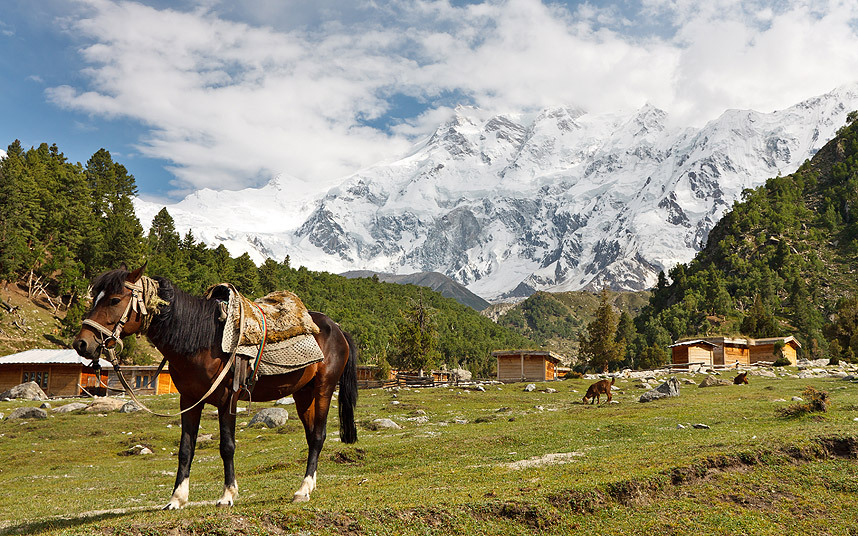 The Fairy Meadows – yes, they really are called that – may look like the Alps but are in fact to be found in the shadow of the fearsome Nanga Parbat peak. Campers are to be found here in summer months, with scarlet and bright blue tents pitched again Teletubby-green grass. Wild Frontiers visits the area for day walks on its 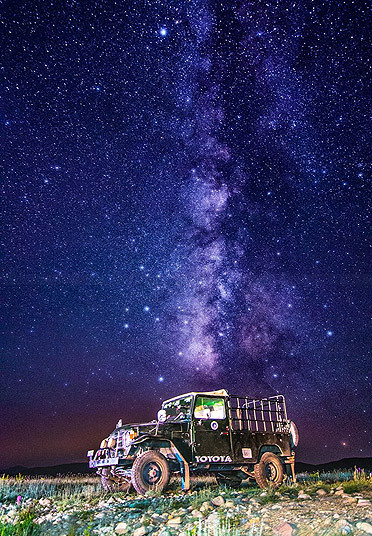 Qammer Wazir is a Pakistani photographer who has captured images around the country. Among the most spectacular are his images of the Milky Way in Deosai National Park. 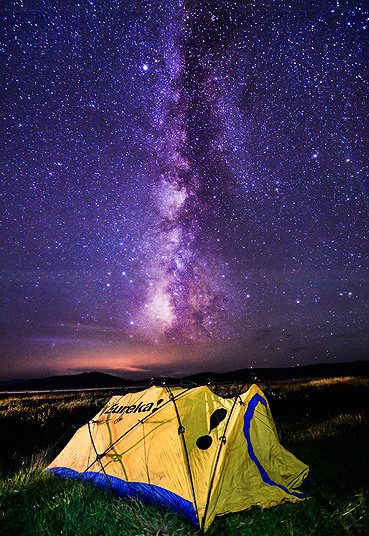 The area is a plateau is located at the boundary of the Karakorum and the western Himalayas, the world’s second highest plateau after the Chang Tang in Tibet. It is known as the home of brown bears, golden eagles, and the elusive snow leopard. More of Qammer’s photos can be seen on his Instagram feed: 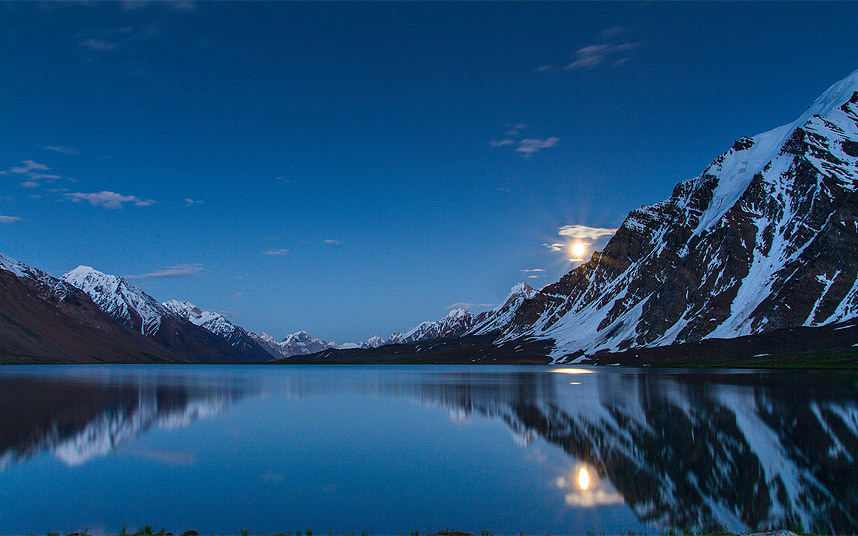 Broghil Valley, near the Afghan-Pakistani border, spans green valleys, mountain spires, peat bogs and white glaciers. Photographer Ghulam Rasool captures its Karambar Lake under a full moon. “My Eyes are Witness”, an exhibition of Mr Rasool’s photos, will be on at Asia House in London until August 28, free admission: 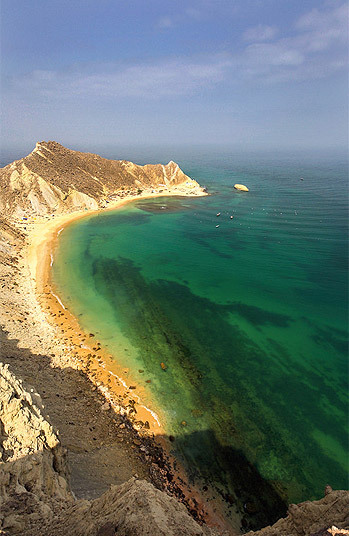 He has also shot images of Astola Island, which may look like the coast of Greece or Spain, but is in fact to be found 25 km (16 miles) from the coast in the Arabian Sea. There are no facilities but camping is permitted; scuba diving is a popular activity. For more of Mr Rasool’s images. 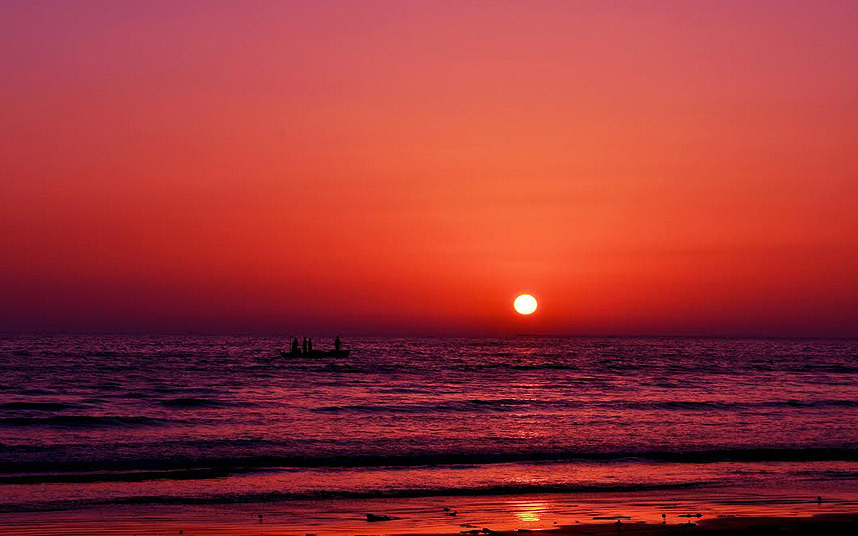 Also on Pakistan’s coast, in the south of the country, there are pretty spectacular sunsets from the beaches near the city of Karachi. Ahmad Haq is a doctor and amateur photographer, who travels widely in Pakistan shooting images. He said:

“I really want people to start changing the perception of Pakistan they have in mind, because Pakistan is a beautiful country but sadly this side of it never gets a place in the news.” For more of his images 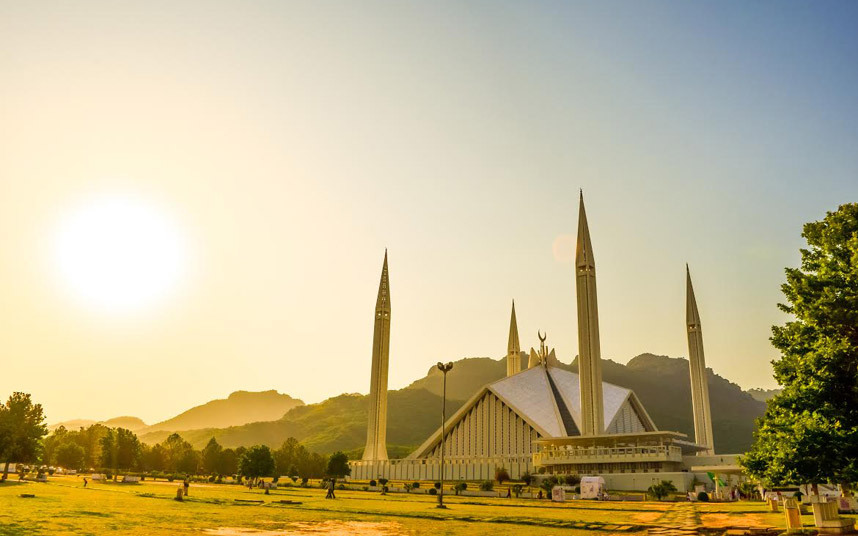 His photos of Islamabad include this shot of the modernist Faisal Mosque surrounded by trees. Many tourist itineraries to northern Pakistan start in this city, before flying north into the mountains. 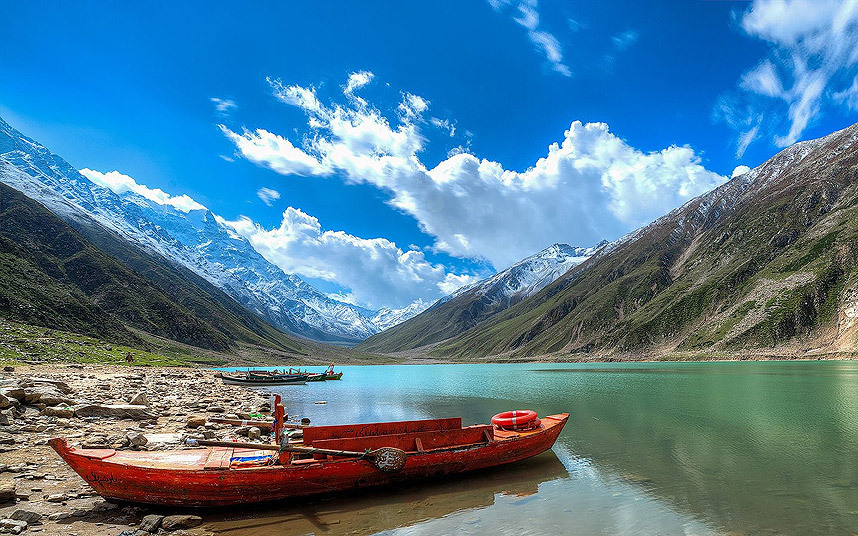 This image by Mazhar Nazir shows Lake Saif-ul-Malook, in the eponymous national park near the Indian border. The valley in wihch it lies was formed nearly 300,000 years ago, while in folk lore, it is believed that a prince of Persia fell in love with a fairy princess here. 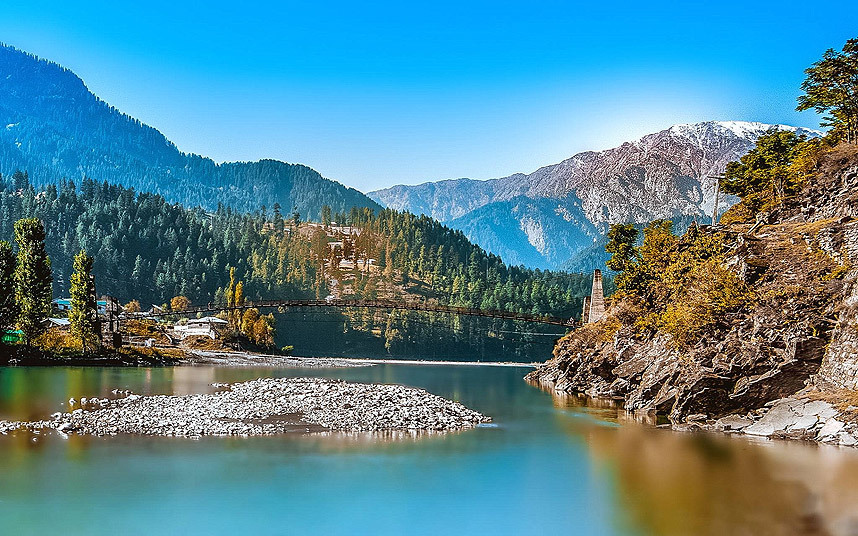 This image shows Sharda, in the Neelam Valley, in Pakistani Kashmir. 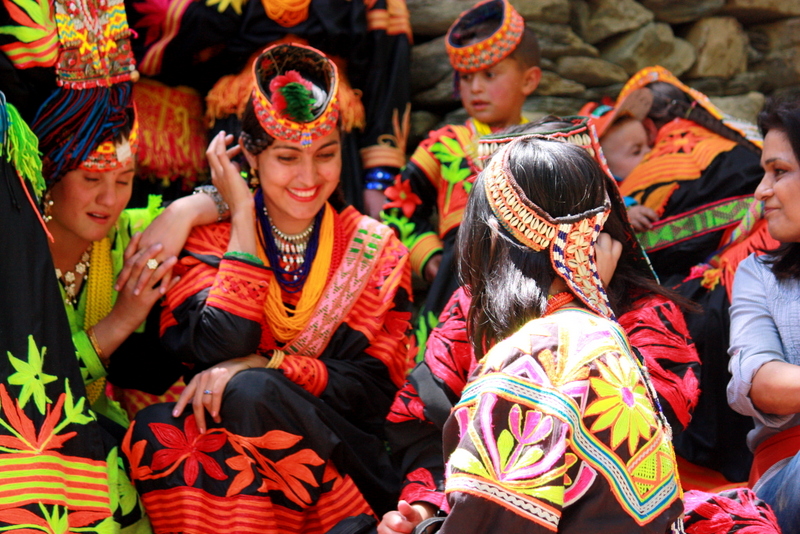 The Foreign Office still regards the Kalash Valley as off-limits, but it is home to an eponymous people, most of whom practise their own Kalash religion. They featured in the 2004 series, Himalaya with Michael Palin. They hold frequent festivals, which include singing, dancing, chanting and the offering of seasonal produce to their ancestors. These photos were taken by Neil Harris on Wild Frontiers’ 16-day Hindu Kush Festival Adventure itinerary, on which travellers spend two days with the Kalash and visit their spring festival. 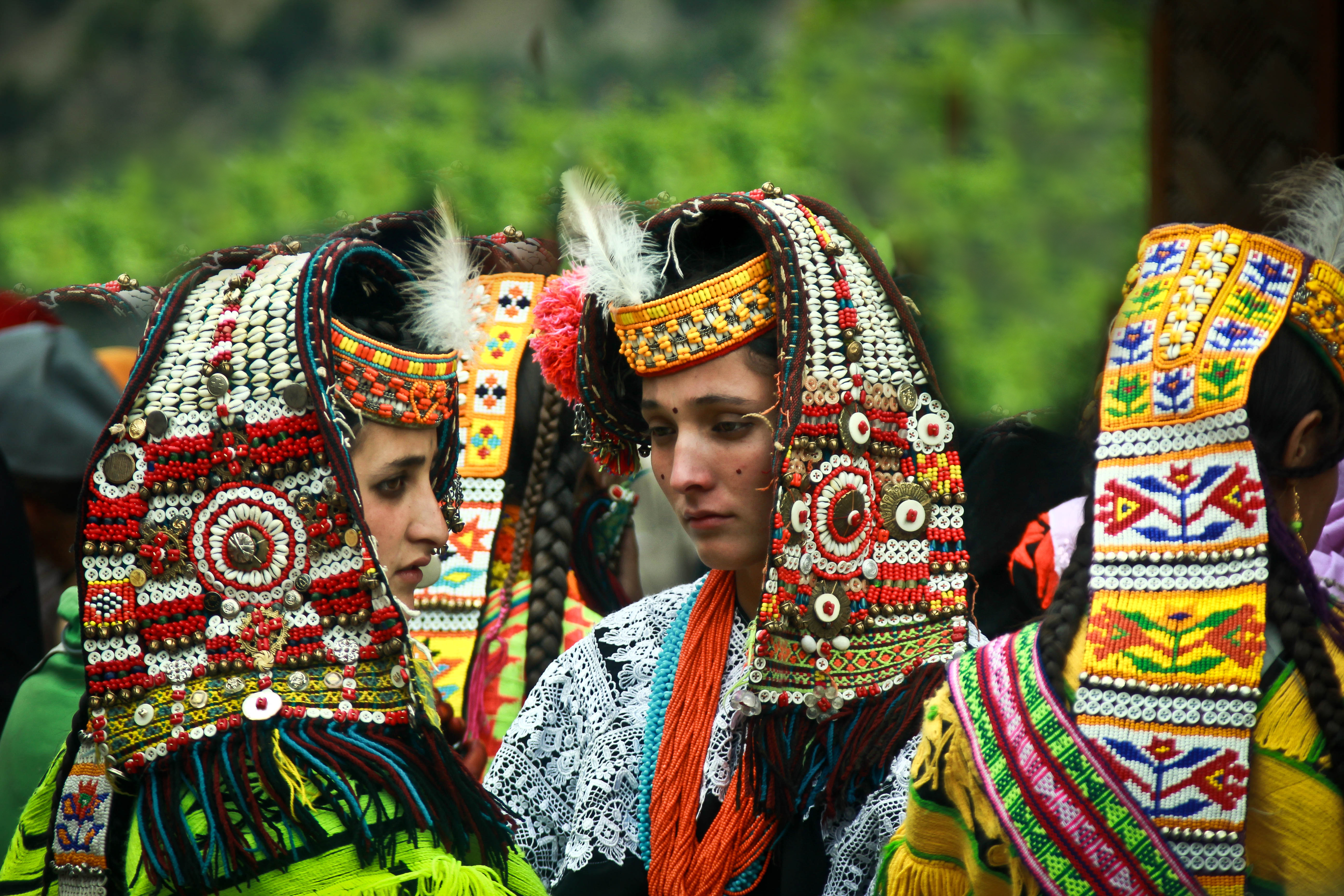 Women and girls dress in brightly coloured and beaded attire for the festivals. Gender roles in the Kalash, whose estimated population is 3,500, are distinct, and many marriages are arranged. 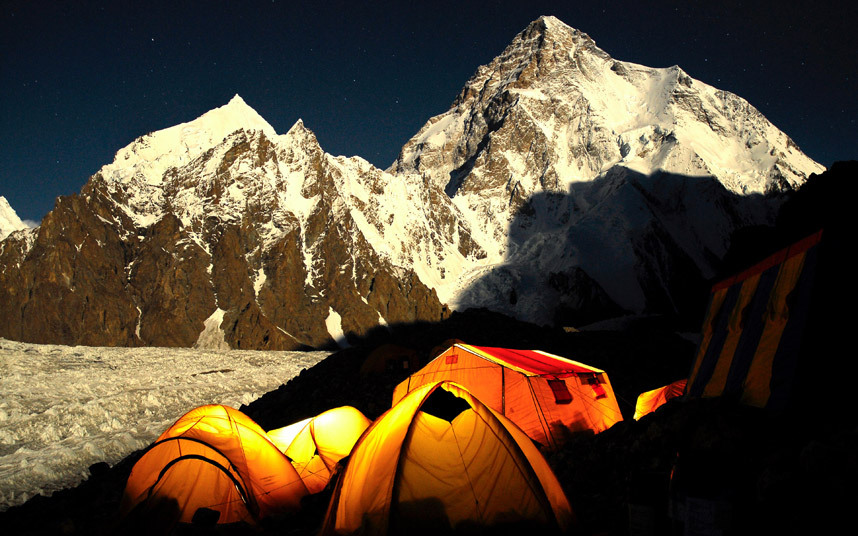 Pakistan offers mountaineers some of the world’s most exciting trekking opportunities. This image shows Broad Peak base camp (4,960 m) at night, with K2 (8,611m) and the Godwin-Austen glacier in the background in the Central Karakoram National Park in the country’s north. 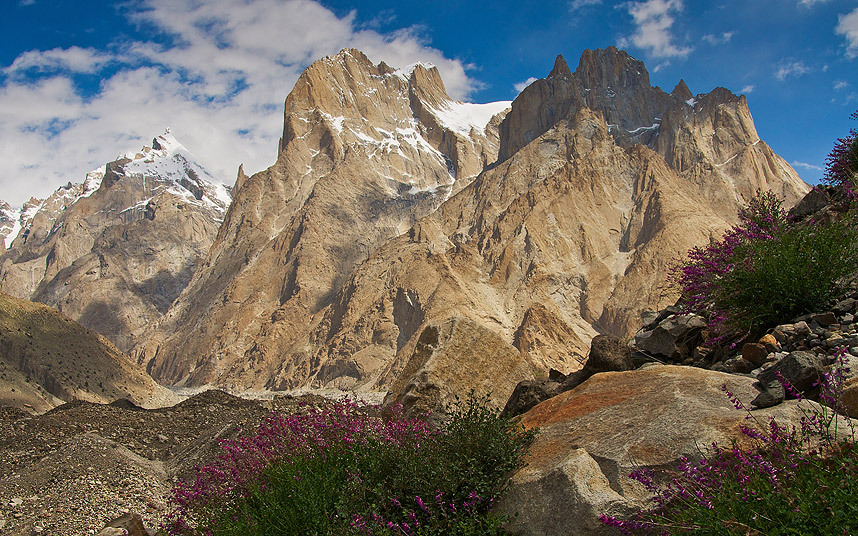 KE Adventure Travel (017687 73966; keadventure.com) offers several trekking itineraries in the frozen landscapes of northern Pakistan. Its K2 and Corcordia Trek reaches the “Throne Room of the Mountain Gods” beneath (but not attempting to summit) some of the world’s most fearsome peaks. The week-long trail affords stupendous views of the Trango Towers (pictured). 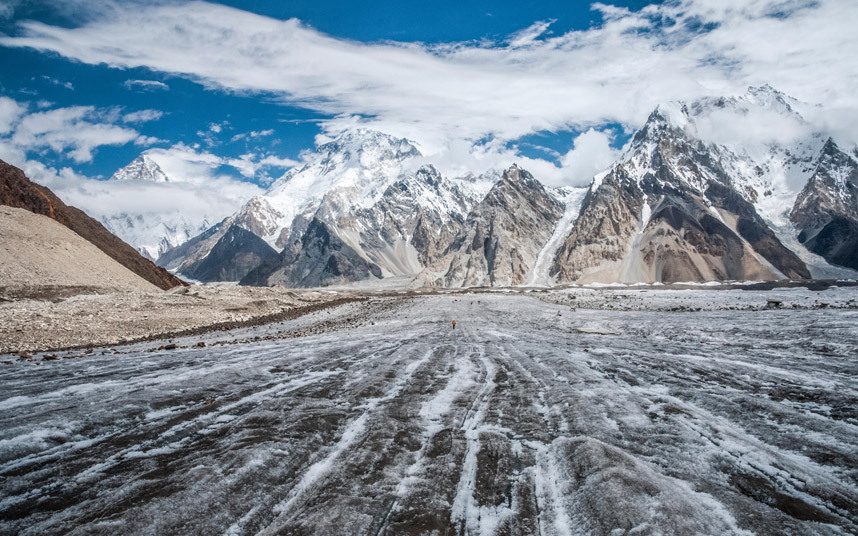 The itinerary crosses the Baltoro Glacier, one of many in this frozen landscape.

Those glaciers melt at lower altitudes to form the rivers that rush through northern Pakistan. The Indus river flows from the Mani glacier in the Central Karakoram National Park, meeting with the Gilgit river at Jaglot, and winding its way alongside the Karakoram highway, the N35, which is one of the world’s highest paved roads, and connects Pakistan with China.